No, I'm not talking about how many kinders are in my class this year (although that IS the right number...).

I'm talking about the number that popped up on the meter a few weeks ago when we tested Sweets. 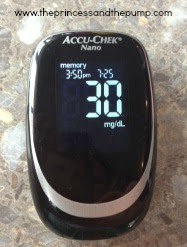 I take pictures of lows.  Later - not in the moment. I don't know why... Just to prove it really happened?

Especially if you have just given her insulin for food.

It was one of those perfect storm situations.  She had been treated for a low and her bg had come up.  She had a snack and we waited until after she was done to bolus... Just to make sure.

Everything looked good.  Insulin was given.

Dex was in start up mode.  So he was no help at all.

When she feels it, it's never good.

It was a bad one.  One of those not easily forgotten lows.  The kind that leaves all of us shaken.

We gave her smarties.  She started crying.  She was having trouble eating them.

I could tell by her eyes.  She wasn't really there.  They were kind of glazed over.  She was talking - but she wasn't with us.  Not completely.

I tried to get her drink juice.  She was trying.  But it wasn't easy.

She was still crying.  She wanted to lay down.

She was getting combative.  She didn't want the juice.  She wanted us to leave her alone.

"OK" she cried.  And she tried again.  And she was able to get most of it down.

She knows what that means.  It's the unspoken.  I don't have to tell her I'm going to get out the glucagon.  She just knows.  She knows if she can't or won't down the sugar then that's going to happen.

It's not a punishment.  It's reality.  She knows she needs it if she can't eat the sugar.

She wanted to go to sleep.  I wouldn't let her.  I had her laying against me.  I was stroking her hair and rubbing her back.  It wasn't but a few minutes and I could see the fog lift from her eyes.

It's the strangest thing.  I have a hard time explaining it.  Putting it into words.

But there are times when I just know she is not there.

Unfortunately, I guess it comes from experience.

We had another one just last week.

I don't know whether these lows are worse or if she's just feeling them more.  I can SEE it more.  SEE it affecting her.  I can tell she is at that tipping point...

It's scary as hell.

Of course, I am calm, cool, and collected throughout.  I hold it together really well.

I guess that comes from experience, too.

It's later when I feel like puking and can't stop shaking.

For the same reasons.

D takes away my control.  It makes me feel helpless.  And while we may be getting used to it....