Her Story, Our Story, Your Story: It's Time to Change the Ending

What is it about some people that just grab our hearts and don't let go?

There are just some people and some stories that have that way about them.

For me, and for many others, Kycie's story is one of those.

I'm not sure why exactly.  But I think it's because when I look at her, I see my own daughter.  The bright, blue eyes.  The infectious smile and giggle.  The curly blond hair.  The innocence.

And because it's not just Kycie's story.  It's our story, too.  And probably yours.

I think that's why I've put off writing this.  Because in order for me to write this, I have to go there.  I have to really go to that place where I know that our stories are really not so different.  And that but for a whisper, I could be the parent grieving the loss of my little girl to Type One Diabetes.

Kycie Terry passed away on Saturday, July 11, 2015.  Hers was a life that ended much too soon.  Taken from this world by complications brought on by undiagnosed T1D.

You can read the first post I wrote about Kycie here.  And you can follow her story and see darling photos and video of this beautiful little girl here.

We have been living with this disease for over six years.  In that time, we have gotten further and further from those panicked first few days and months.  The shock has worn off.  The fear has subsided.  Diabetes has slowly seeped into all aspects of our life and become just another part of what we do.

Her diagnosis no longer feels like it was yesterday.  It feels like it was a lifetime ago.  The days before are foggy and faded.  I can no longer remember a life that didn't include counting carbs and changing sites and needles and blood and millions of test strips.

Until last Sunday when I read that sweet Kycie had passed away.

And my stomach dropped to my toes.  Tears filled my eyes.  And I was immediately transported back to that April day six years ago when our lives changed forever.

I knew.  I knew what it was that morning when we walked to the pediatrician's office.  I didn't want to know - but I did.

He thought it was flu.  After all, her symptoms could have easily been the flu.  And we had just been there weeks earlier for her three year old well check.

If I hadn't said that I was worried it was diabetes....

She was throwing up.  She was losing weight.  She was drinking and going to the bathroom a ton.  She was so lethargic that she could hardly walk or stay awake.  Her breathing was labored.

You know what would have happened.

It's humbling.  It's sobering.  And it's infuriating.

I don't know.  I just did.  Somehow I knew the symptoms.  And it saved her life.

And he tested her.

And it saved her life.

I'm angry that any child dies from undiagnosed type one diabetes.

Today was not the best diabetes day.  But as I was driving Avery and a friend to the pool, listening to their giggles and chatter about braces and water slides and who they had seen from their class over the summer, I felt so thankful.

All I know is that I am grateful.  The kind of grateful that makes you fall to your knees and sob.

And the kind of grateful that says enough is enough.

No more children should die from this disease.  No more.

It's as easy as testing one single drop.

I don't know why Avery survived and Kycie did not.  But I do know that I owe it to that sweet little girl and her incredible parents and family to take that gratitude and turn it into action.

Let's share the symptoms.  Share our stories.
Check out Test One Drop.  Read their mission and see how you can get involved. 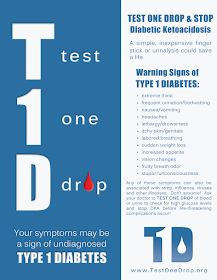 Do it for my child.  Do it for yours.  Do it for Kycie.
But most importantly, do it for the names we don't know.  The kids who have yet to be diagnosed.  Let's change their stories before they even start.
at 12:20 PM
Share