When Your Invisible Illness Isn't as Invisible As You'd Like

It's hard to believe it's been six months since I last posted!  Life seems to have this way of speeding up and before I know it, it's JULY!  Wait... What?!?

We have been going along and doing our thing just like always.  Diabetes is a part of our lives.  But it's not the main part anymore.  Instead of being in the front seat like it was when she was first diagnosed, it's now kind of pushed into the trunk.

Except when it rears it's ugly little head.

And makes me wonder if it's really been living in the trunk or if, for some of us, it's been riding in the front seat a lot more than I realized.

Avery has always been pretty cool with diabetes.

She was so young when she was diagnosed that she doesn't remember life before.  Testing and site changes, and counting carbs has always been a part of her life.  It's just the way it is.  No big deal.

She's never minded wearing a pouch with her Dexcom - or now her phone - around her waist.  She's never complained about visiting the nurse's office.  She's never worried about what her classmates think.  I never thought she even viewed herself as different.

It started with complaining about having to leave class "all the time" to go test her blood sugar.  She doesn't like to miss things and she hates having to leave in the middle of class.  That's understandable.  So we decided to loosen up her range a bit and live with some higher numbers while she's at school.  (Not high numbers - just not as tight of a range)

We also started having her use her phone more to text her Dad (he handles the daily D care at school since I can't exactly tell a class of Kinders to hold on a minute while I answer a call!) with her number.  The Dexcom Share is amazing for this.  It lets both of us see what she is and how she's trending so it really lets us make treatment decisions together rather than having to always involve the nurse.

We had a new school nurse this year and SHE WAS AMAZING.  Seriously, I don't know how we've gotten so lucky!  She's a gem and she really learned quickly about T1 and how to handle it.  She wasn't just taking care of Avery - - - She had TWO other T1's and a school of about 1,200 kids!  I'm so grateful to her - she did such a great job!

Anyway, we are working toward more independence and self care.  Hard to believe, next year will be Avery's last year in her elementary school. 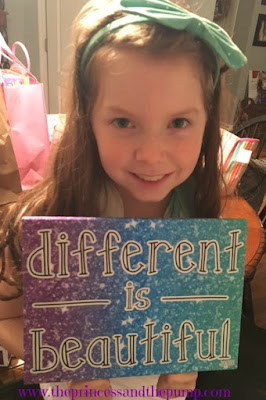 I had to get it for her.  I thought it was awesome and a little sad at the same time.

She's never liked when random people would ask her about the "thing on your arm".   But recently, it's gotten worse.

Avery wears her Dexcom sensor on her arm.  Her back (upper bottom but she hates it when I say that) is reserved for her pods.  She is still super thin and muscular.  The endo has not recommended her belly or her legs be used for sites.  Plus, we get great readings and wear out of arm sites.  The only downside is that you can see it.  She loves the pod because it's hidden.  Dex is right out there when she's wearing sleeveless or short sleeve stuff.

School hasn't been an issue.  She says they all know what it is and don't ask about it.

The pool is a different story.

We have always had great luck using the Opsite Flexifix tape around the sensor. (Click that link to see what we buy and where.  I don't get anything from it if you buy or it or anything.  This is just what we use!)  We can get a good two weeks out of it.  If she's swimming a lot, it starts to come off.  And here's the dilemma.

This is a no win situation.

We have finally decided that for the pool we will wrap it.  My awesome Diabuddy, Lora, came to our rescue on vacation when I ran out of Opsite. 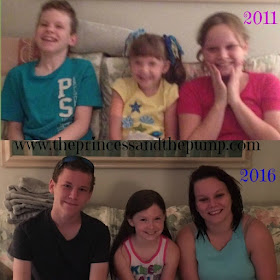 Avery and Lora's Kiddos in 2011 and now! They are all growing up waaayyy too fast! Stop!

She let us borrow a roll of CoBand tape.  It did well holding Dex on while she swam.  Although it's hot pink and doesn't exactly blend in, she would rather people think that she's injured or something than ask about the sensor.

I really don't know what to make of all this.

We've worked really hard to teach her empathy.  We've talked about how everyone has their "thing".  No one's life is perfect.  She has diabetes.  Other kids have ADHD or have to split time between parents that fight all the time or have speech problems or a million other things.  She gets that.

That's hard for any kid.  But when you add a disease that means that you might look a little different and have to do different things than your peers when your number one priority is figuring out where you fit in... That's even more complicated to navigate.

I'm not surprised that we are dealing with these issues.  I knew it would happen eventually.  It's just happening sooner than I thought!  I feel like she was just that little girl with her pacifier and her pump!

All we can do is keep moving forward and addressing each "issue" as it arises.

Lord knows, I can't take it away from her no matter how much I might want to at times.  All I can do is help her through it.  Give her choices.  Let her have a say.  Keep telling her she's awesome.  And being there for her when she needs me.

She's hung her "Different is Beautiful" sign in her bedroom right by her door.  I see it every time I leave her room.

And every time, it tugs at my heart.